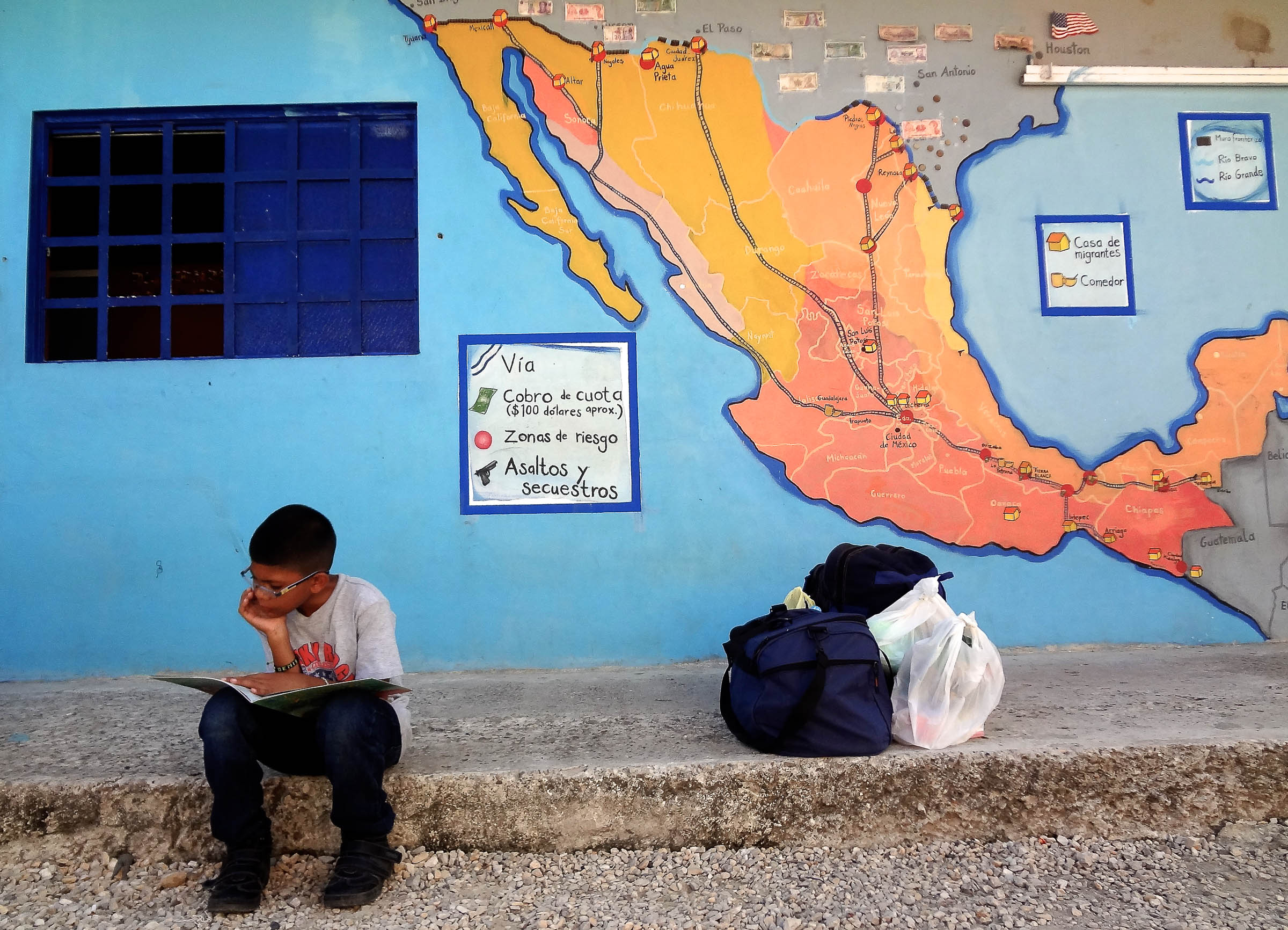 Whoever might feel comfortable in their academic world, thinking that none of these issues affect their pristine certainties, has long abandoned real academic interest, having forgotten that science, much like knowledge, seeks transformation and human improvement. -José Manuel Valenzuela

In August 2015, a group of 38 students, professors, researchers, photographers, filmmakers, artists, and activists from 13 different countries boarded a bus in San Cristóbal de las Casas for a week-long trip across the southern Mexican state of Chiapas and the cities around it. The trip was part of a three-week course on “Art, Migration, and Human Rights,” offered by the Hemispheric Institute of Performance and Politics. The call for participants for the course stated the following:

The crisis surrounding migration in the Americas has reached epic proportions. This course, “Art, Migration, & Human Rights,” will explore the violence resulting from dictatorships, neoliberalism, and the trafficking of drugs and humans, which has led to an increase both in migration and in the violence that migration itself produces. Taking place in Chiapas, Mexico, the course will introduce participants to the various groups that intervene in the crisis: the Zapatistas, journalists, photographers, filmmakers, human rights activists, scholars, artists, and others who try to bring international attention to the situation and help mitigate the violence. In addition to interacting with local artists and activists, the course will examine current scholarship that explores the history, politics, and potential outcomes of the current situation. Jesusa Rodríguez will lead an intensive performance-activist workshop as part of the course, which will culminate in a collective project that brings together scholarship, art, and activism on these urgent topics.

Graduate students came from throughout the Americas: Canada, the United States, Mexico, Puerto Rico, Guatemala, El Salvador, Venezuela, Colombia, Brazil, Chile, and Tunisia, by way of a Canadian university. Additionally, we accepted four undergraduate students from New York University Abu Dhabi (NYUAD); two from the United States, one from Jordan, and one an Iraqi based in Dubai. The three graduate assistants, Luis Rincon Alba and Olivia Gagnon from Performance Studies at New York University (NYU), and Pablo Domínguez from Spanish and Portuguese at Princeton, came from Colombia, Canada, and Mexico, respectively. Marcos Steuernagel, a Brazilian Postdoctoral Associate at NYUAD and a recent NYU Performance Studies graduate, was our digital publishing instructor, working with Lex Taylor and his Typefold team in New York City on Tome, our platform for academic publishing. Diana Taylor and Marcial Godoy-Anativia taught the course, together with Jesusa Rodríguez, and were joined by photographers Susan Meiselas and Moyses Zuñiga and human rights activist Rubén Figueroa.

During the first week of class, we worked intensely on theoretical issues such as the right to have rights, the development of the political, legal, and existential categories “migrant” and “border,” and the political and economic forces behind migration. We explored the spectacle of the wall (or, in the case of Mexico’s southern border, the lack thereof) in a performance of nation-ness, the violence leveled at the face and “faciality,” and the role of photography and other forms of presentation and representation used by artists, activists, and journalists to make invisibilized violence visible. We explored the forensic work being done to identify the dead and disappeared, and the efforts made by families to learn about the whereabouts of their loved ones. The readings for the first week can be found in the syllabus, and the daily responses that the students wrote are available on the course blog, along with other short pieces of writing produced in the context of the course.

Yet in order to grasp the very real consequences that these issues have on the daily life of migrants, we felt the need to see for ourselves a small part of the immense institutional and counter-institutional apparatus that constitutes contemporary migration in southern Mexico. Thus, in collaboration with local researchers and activists, we organized an itinerary that would allow us to do so. The route we took can be seen here; the dynamic map allows the user to navigate either by date or by points of interest, with links that tie it to the rest of this dossier.

Following the first week of readings and classes, and the second week of travel, we dedicated the third week to creating two distinct yet complementary pieces: a street action led by Jesusa Rodríguez, and a digital dossier that would organize our ideas and experiences. In order to produce this dossier, we divided ourselves up into five working groups, each one lead by a faculty member or a graduate assistant, and each addressing a different topic. In addition to trying to balance our scholarly interests and levels of expertise, we made sure that each group had at least one photographer, a videographer and/or sound recorder, a native Spanish speaker who could conduct interviews, a main writer, and a person responsible for uploading content to the Tome platform. The groups were: Migration; Control and Security; Networks of Support; Gender, Sexuality, and Migration; and Forensics. This dossier is the culmination of these three weeks of investigation.

One way to read this dossier, then, is to follow these topics from first to last. At the end of this Introduction, there is a link to the first topic, “Remapping Migration: Rights, Body, and Resistance,” which explores the dynamic relationship between the maps of migration and the multi-directional flows, not only of people, but also of factors that cause people to migrate in the first place. It reminds us that while migrants might follow routes and look at maps, the only geographical points of significance are where one begins and where one ends; all other movement is generated by encounters. The next topic, “The Performance of Control and Security,” explores the stark contrast between visibility and invisibility, expressed in the simultaneous presence of multiple checkpoints (internal “borders”), invisible detention centers, and the porousness of the physical border between Mexico and Guatemala. It reflects on the dissonance between the militarized performance of “border security” at the checkpoints and the daily movement of informal migration across the 370 (or more) informal crossing sites. “Actors, Networks, and Counter-Machines” aims to track the complicated network of groups—some governmental, many paragovernmental, others overtly opposed to the Mexican government— that attempt to work to protect and aid migrants in a borderized Mexico. These groups, which act as “counter-machines” to the working of the Mexican state, relate to legal systems, Mexican politics and history, religion, charity, and resistance movements in complex ways that the section explores. “Gender, Sexuality, and Migration” renders visible the unique experiences of migration’s most vulnerable populations: not only women, traveling with or without children, but also members of the LGBTQ communities. While all migrants face innumerable dangers along the migratory route, women and queer migrants are subjected to painfully intensified forms of violence. The final topic, “The Politics of Care: Mourning, Memory, and Forensics,” seeks to make an intervention into the dissemination of raw numbers of the violence in Mexico, which can numb the reality and pain of the deaths. Instead, it explores ways in which shelters and other institutions might become places for the creation and sustenance of life in the face of so much death and destruction.

Linearly following the topics examined by each work group, however, is only one of many possible ways of reading this dossier. The top navigation bar provides a few more options. The “Where we went” menu features a list of places that we visited: migrant shelters, checkpoints, train stations, crossing points. Each of these places is geotagged, and includes additional information and pictures. Clicking on “What we saw” displays all of the over 500 pictures we selected from the many more we took during the course, as well as audio and video files. Each of these media items has additional metadata, including titles, captions, and tags, providing the reader with a visual entry point to our immersive experience in Chiapas. The aforementioned “Course Blog” features reading responses and other short pieces of writing produced throughout the course, while the Bibliography leads to an automatically generated list of all the works cited in all Topics throughout the dossier, one of the many Tome features specifically geared towards academics. Finally, under “This Dossier,” there is a list of pages with additional resources for the course and the dossier.

In addition to the five aforementioned topics, there are two pieces that operate as a coda to this dossier. “Art and Performance” features the video documentation of México es una fosa comun (Mexico is a mass grave), the street action we created led by Jesusa Rodríguez, and addresses the question of what art—and, more specifically, what performance—has to contribute to a conversation about migration and human rights in southern Mexico. “Collaborative Pedagogies” includes reflections by Jesusa Rodríguez and Diana Taylor on the collaborative nature of this dossier and of the course. While each person was assigned to a specific group responsible for one of the main topics, all of the writing is unsigned. This was a conscious decision by the group to cultivate a collaborative pedagogy, equally manifested in the two distinct pieces we created over the course of our third week together: the collective street action and the digital dossier. Although collaborative work requires different kinds of expertise—as mentioned before, each person had a specific role in each work group—the dossier is the product of where we went, what we saw, and what we were able to write, as a group. The list of contributors thus functions as our digital signature to the dossier.

On the first day of her performance workshop, Jesusa Rodríguez opened with an exercise she has used for years, in which she asks each participant to bring a stone to class. The exercise is simple: each participant places his or her stone on the pile, one at a time, attempting to reach the greatest possible height without knocking down what has already been built. “The final result of the exercise is always telling and beautiful,” says Rodríguez, “because the pile of stones represents the collectivity and the work that everyone in it is capable of doing together.” This dossier, then, is our digital pile of stones, reflecting the places we have been to, the things we have seen, and the people we have met, always trying to reach as high as possible, without destroying what others have already made.